City Palace Jaipur The city of Jaipur takes you to the Rajput era. The city is full of culture and architecture and that is the reason why the city sees a good footfall of tourists throughout the year. One such architectural delight in the heart of Jaipur is the City Palace. It symbolizes the city’s rulers and royal days.

City Palace is one such building. Who has kept the history of the city safe? And a symbol of grandeur. Once you enter the palace. Then you will be mesmerized by its beauty. The palace is immersed in amazing architecture and artifacts from the inside. The City Palace used to be the home of the royal family of Jaipur. However, it was later split into two parts. One containing some courtyards and museums and the other where the royal family still resides.

City Palace was built by Sawai Jai Singh. Who was the head of the Kachwaha Rajput dynasty? This palace served as his living throne. And they started building the way to the palace in the 17th century. Because he wanted to shift the state capital from Amber to Jaipur.

Raja Man Singh was the last ruler of this dynasty who assumed the second throne of this palace. The beautiful structure here was designed by architects Vidyadhar Bhattacharya and Samuel Swinton Jacob, who brought a European influence to the design.

The original structure of the City Palace was built by Maharaja Jai ​​Singh. Which started from the outer wall. After several decades the complex of buildings and courtyards were linked together. Hence all the structures inside the palace bear a different time stamp.

The architectural style of City Place was a beautiful amalgamation of Rajput, European, and Mughal styles. Sandstone in the colors red and pink was used for Many arched small palaces built in the huge courtyard of this palace. These little palaces are now being used as museums. Now tourists can either walk around the palace on their own.

Inside this palace when you will go from one courtyard to another. So you will see relics of the past like cannons and tall statues. The one who gives you all your attention. Do not miss to admire the breathtaking structure of the palace as soon as you enter through the main gate of the palace. 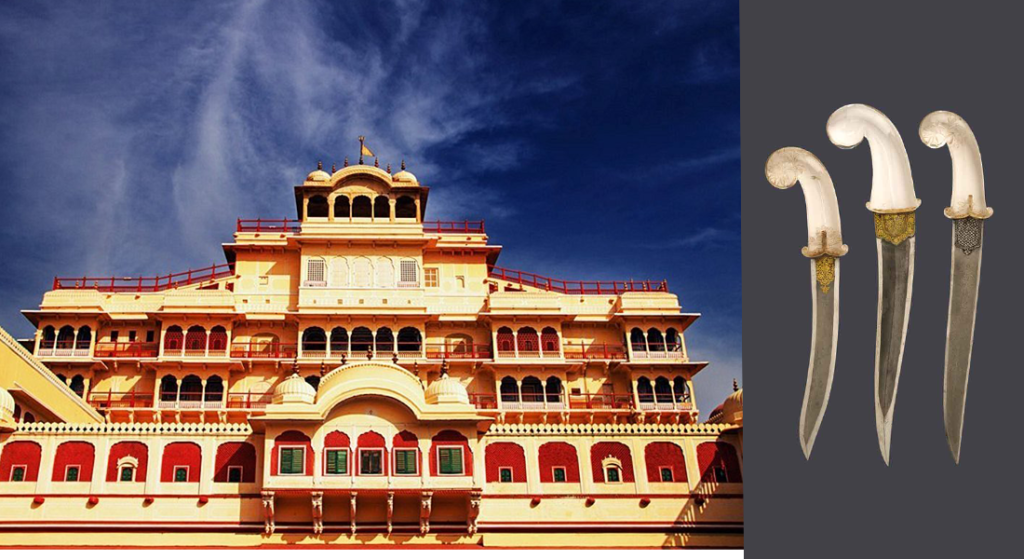 There are three gates leading to the City Palace. The first is Tripolia Gate, the second is Virendra Pol and the third is Uday Pol. There are also four small gates called Pritam Niwas Chowk in the courtyard of the main palace. Those who go towards Chandra Mahal. It is believed that these gates were built to represent the four seasons and four Hindu deities namely Lord Vishnu, Lord Shiva, Goddess Parvati, and Lord Ganesha.

In English, peacock means peacock. The Peacock Gate represents autumn. The gate features intricate 3D images of peacocks that make for a great backdrop for picture-taking. The Lotus Gate signifies the season of summer while the Lehariya Gate signifies the season of spring. Leheriya is a type of print that is unique to Rajasthan and is worn by women only during the spring season.

The last one, called the Gate of Roses, is decorated with carvings of roses and is a symbol of the winter season. All these gates are a work of exquisite craftsmanship and are widely photographed by tourists.

In the 19th century, the British renamed Mubarak Mahal as ‘Welcome Palace‘. Maharaja Madho Singh II built it to welcome his guests. The construction style of this palace also reflects European culture. Because the Maharaja used to host many foreign guests.

Now the palace has been converted into Maharaja Sawai Mansingh Museum because it displays an extensive collection of pashmina shawls, robes, and Sanganer block print fabrics among other opulent outfits belonging to the royal family.

One of the exhibits here is the dress of Maharaja Sawai Madho Singh I. He was known for his short stature and heavyweight. The black-and-white photographs on the wall also show the royal family wearing some of the costumes on display. One such outfit is the traditional black colored dress with Gota Patti work worn by the women of the royal family on the occasion of Diwali.

The entrance to the Chandra Mahal, located on the western side of the City Palace, is also known as the Peacock Gate. Paintings depicting the old city of Jaipur, floral carvings, and breathtaking mirror decorations will take you back in time. There are seven floors in this building. Each floor is called by unique names like Rang-Mandir, Sukh-Niwas, Mukut Mahal, Pitam-Niwas, Shri-Niwas, and Chhavi-Niwas.

The ‘Sukh Niwas’ is white with a slightly blue tinge and just being there gives you a feeling of peace and calm. The ‘Rang Mandir’ has a floor of mirrors and its walls, pillars and ceiling are decorated with mirrors of all sizes. The pillars and ceiling of the dining room on this floor are covered with Mughal motifs and the royal dining table. The ‘Shobha Niwas’ has blue tiles and mirrored walls with gold leaf designs.

The Maharaja of Jaipur used ‘Chhavi Niwas‘ as his monsoon retreat and it is as beautiful as the other floors. At the top of the Chandra Mahal is the Mukut Mandir Mandap where the Jaipur flag is hoisted daily.

You need a separate ticket for Chandra Mahal as most of it is still the residence of the royal family but the ground floor has been converted into a museum. You can glimpse the history of the city through manuscripts, carpets and artifacts belonging to the royal family.

Earlier Anand Mahal was known as Sileh Khana or Maharani’s Palace. The first thing that catches your attention in this armory is the life-size structure of a horse, dressed in full body armor when they went out. battlefield with their riders.

The armory houses a vast collection of weapons used by the Rajputs in wars. Knives, daggers, finger braces and rifles are just some of the wonderful things. Which you will get to see in this armory. Like dagger weapons have intricate carvings. Apart from this, inlay work is done on the handle. Which almost makes you forget the bloodshed they must have seen during their use. Some of the exquisite weapons here date back to the 15th century. 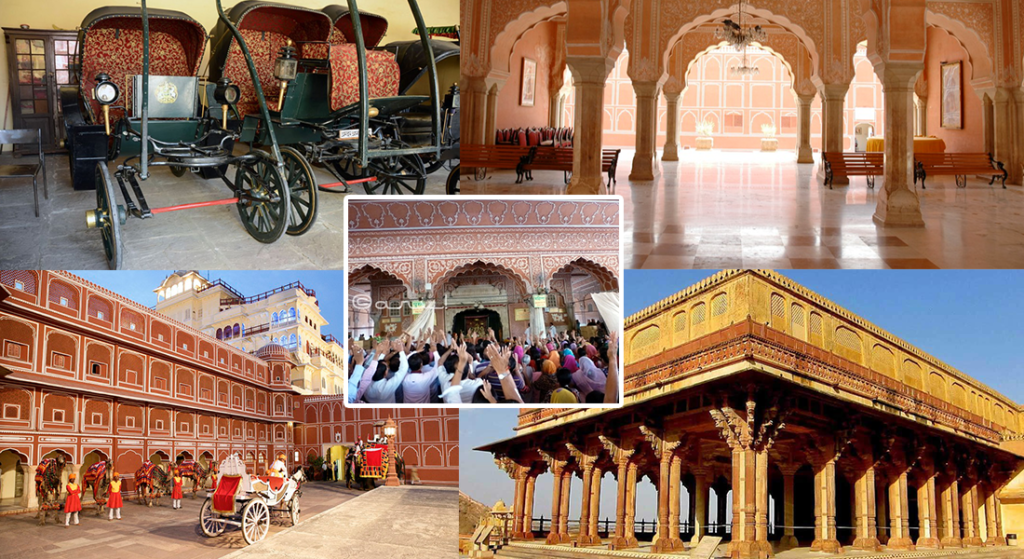 Baaghi means chariot. You can also see the various chariots and royal rides used by the royal family. which the royal deity was transported in. A European-style cab was gifted by Queen Victoria to Maharaja Sawai Ram Singh in 1876.

In the royal court, the Maharaja used to hold a private meetings with his courtiers. This part of the palace not allowed photography. And the royal throne known as ‘Takht-i-Rawal’ along with the chairs used by the courtiers also adorns this hall. Whose ceiling is painted in a healthy mix of gold and red?

The walls of this hall have life-size portraits of the Maharajas of Jaipur, framed ancient texts, paintings, embroidered carpets, and original handwritten manuscripts of Hindu scriptures.

The idol of Govind Dev ji is installed in the premises of this temple. and dedicated to Lord Krishna. There are numerous devotees that visit this spot daily. The temple is crowded with people during the Shri Krishna Janmashtami festival.
Because the palace is divided into two parts – hence the museum and the residence of the royal family, you will need to buy two separate tickets for each part. You can also take a full ticket in which you can visit both places.