Leh ladakh : There is no doubt that Ladakh is one of the most beautiful tourist destinations in India, replete with high mountains, lakes, rivers, Buddhist monasteries and religious places. Today I am going to tell you about 10 such places in Ladakh, which have been placed at the top of the list of Ladakh tourist places for its natural beauty, serene natural environment and beautiful views around it.

If seen, there is not a single place in Ladakh where after going you will feel that I should not have come here. Because every place located in Ladakh has its own importance, which are filled with its different look, natural beauty and beautiful views around you amidst the mountains, after seeing which you will feel that you are You have come to a different world. 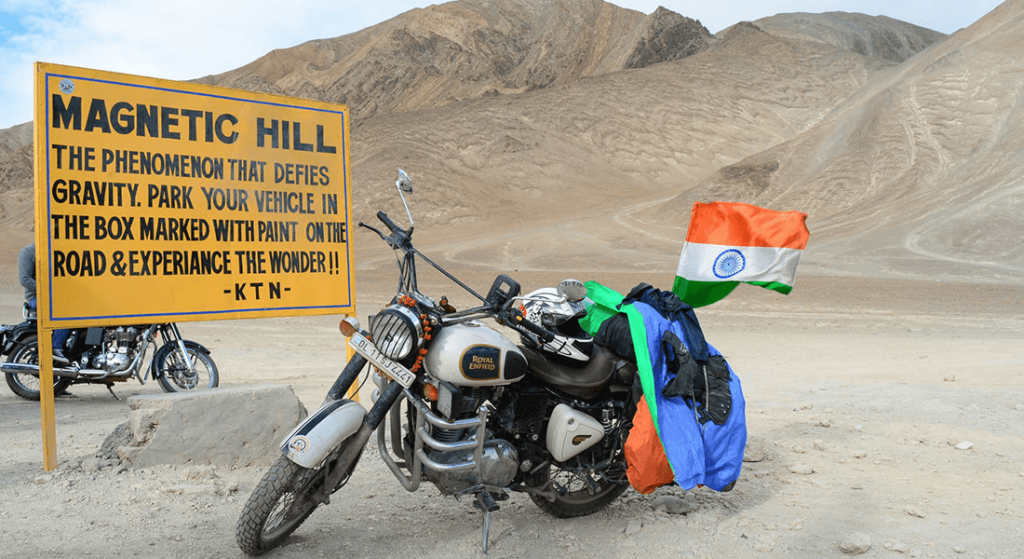 This is such a place in Ladakh where you will be surprised after visiting. That is because here, when the car is parked on the road in Newton mode without starting it, it automatically starts going towards the climb. Every year tourists from all over the country and abroad come here to see this sight with their own eyes and to know its secret.

If seen in the true sense, the car goes downhill, but due to optical vision, tourists going here feel that the car is going uphill.

For this reason, we have included this tourist place in the list of top 10, so that after visiting the Ladakh trip, you yourself visit this mysterious place and realize for yourself whether it really happens here or not.

Leh ladakh in The Buddha Monastery 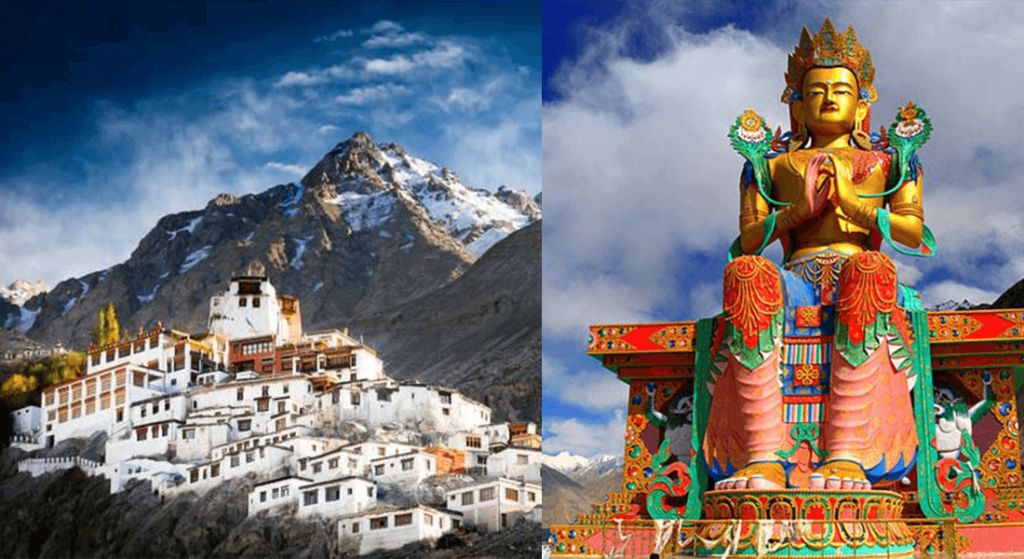 This monastery is situated in the Nubra Valley of Ladakh, situated on the hills above the village of Diskit, which is also known as Future Buddha.  The monastery is 350 years old, in which a 106 feet high statue of Maitreya Buddha is installed.  Monastery is considered to be one of the oldest and largest monasteries in Nubra Valley.

Monastery was built by Changzem Tserab Jangpo, a disciple of Tsong Khapa, in the 14th century, inside which there are different types of Tibetan paintings, which look quite beautiful.

₹ 30 has to be paid to enter this monastery and if a person wants to fly a drone here, then he has to pay ₹ 500 separately. 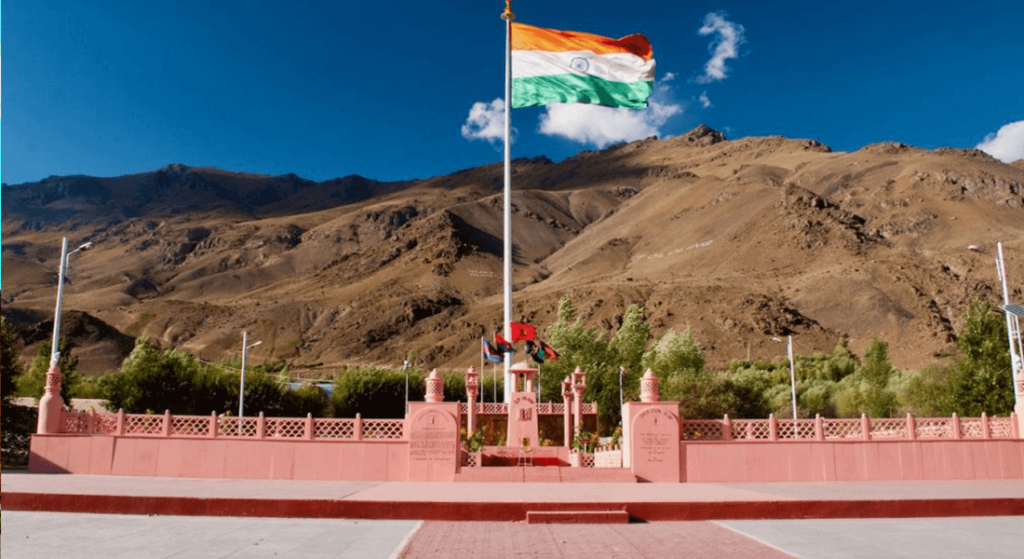 When it comes to visiting Leh Ladakh and Kargil’s name is not there, then patriotism seems incomplete. Kargil is not only recorded in golden letters in the pages of history, but every Indian’s chest widens with pride on hearing his name, because Kargil was the center of conflict between Indo-Pak war in 1999.

It is a district in the Union Territory of Ladakh, India, situated in the middle of the river valley of the beginning of Ladakh. It is about 215 km from Leh. and 205 km from Srinagar. Is situated at this distance.

Kargil and its surrounding area is mostly famous for Buddhist monasteries. 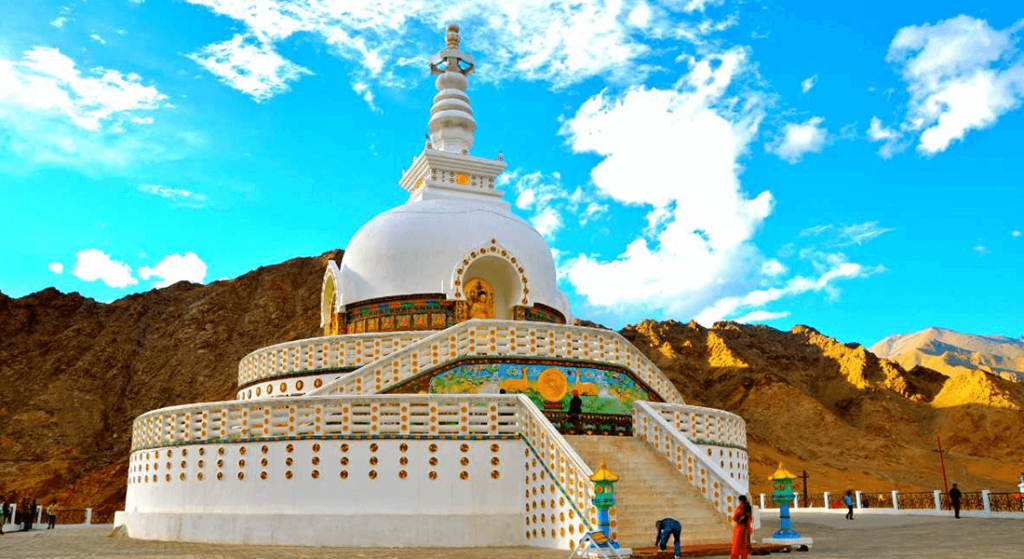 This Shanti Stupa is located 5 km from Leh district in the Union Territory of Ladakh, India. Is at a distance of. The height of this stupa is 11,840 feet above sea level, which is considered to be the world’s highest Shanti Stupa.

This Shanti Stupa is located 5 km from Leh district in the Union Territory of Ladakh, India. at a distance of which is the world’s tallest Shanti Stupa. This Shanti Stupa was built together by Japanese and Ladakhi Buddhist monks to commemorate the completion of 2500 years of Buddhism.

On climbing on top of it, one gets to see a very beautiful view of Leh city. 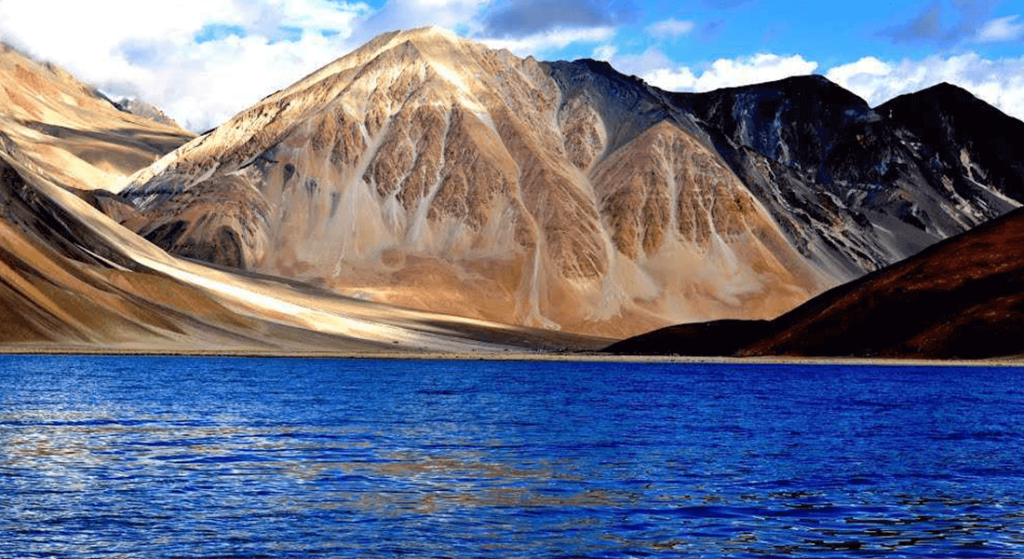 This lake is famous all over Ladakh for changing its colours. The color of this lake is seen to be blue, red and sometimes even green.

Many films have been shot near this lake, but during the shooting of the movie 3 Idiots in 2009, this lake became very much discussed and in today’s time this lake has become a major attraction of Ladakh.

The water of this lake is saline due to lack of drainage anywhere, and despite being saline, this lake freezes in winter, on which you can ride a bike etc. 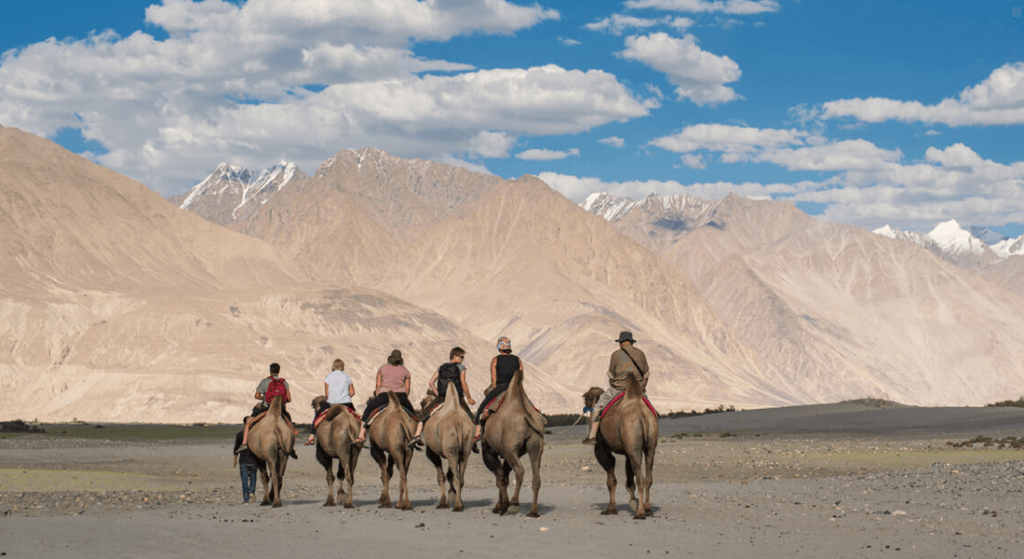 This place is especially famous all over Ladakh for its double humped camel, where you can ride a two-humped camel after visiting. Apart from this, you can also enjoy entertainment like ATV ride (which happens on the sand) and Archery here. 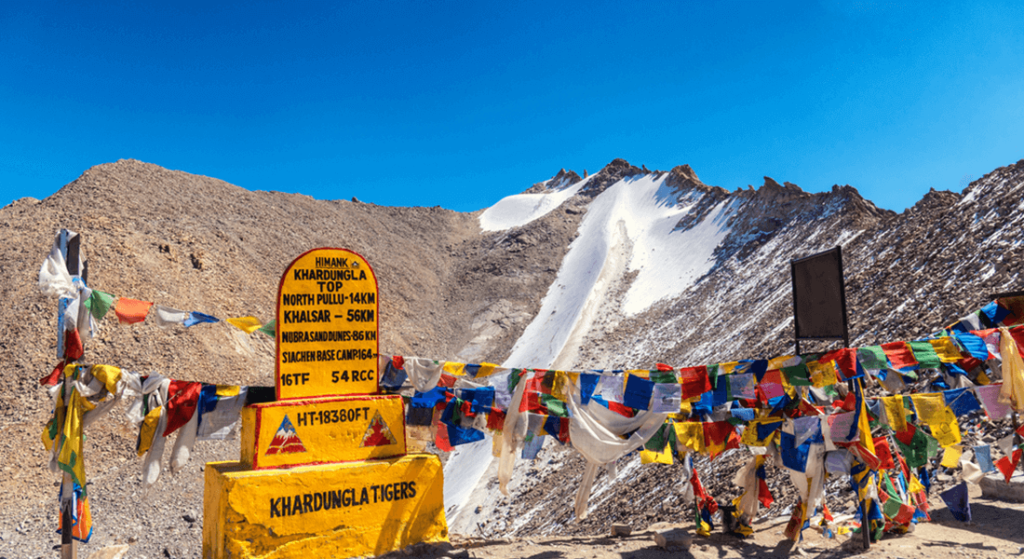 Khardung La Pass is about 40 km from Leh. It is situated at a distance of 5359 meters (17582 ft), which has also got the status of the world’s highest carriageway. War goods were also transported to China through this route during World War II. The vehicles of the Indian Army are still seen passing on this road.

To go here, you need an inner line permit, which you can get done from the DC office of Leh or any travel agent’s shop present there.

Due to Khardung La Pass being located at the highest point of Ladakh, the amount of oxygen here remains low, due to which the possibility of altitude sickness increases when visiting here. So if you are going here, then definitely take medicine etc. with you to avoid attitude sickness, otherwise you may become a victim of attitude sickness.

This lake, also known as the twin lake of Pangong Lake, is located in the Changthang region of Ladakh. This lake is the first lake to be included in the list of Ramsar site in Ladakh. The height of this lake is 4522 meters (14,836 feet) above sea level, due to which the amount of oxygen here is less and this is the reason that there is not much crowd of tourists here, due to which the atmosphere here remains absolutely calm. .

This lake is also known as Changthang because of its location in the Changthang region. This is the second such lake in Ladakh, which has been included in the list of Ramsar site. This lake is made up of lakes Tso Kar (salt water lake) and Staratspuk (freshwater lake).

Around this lake you can find Tibetan gazelle, Tibetan wolf and Tibetan fox as well as many other animal species.

People of all three religions, Hindu, Muslim and Buddhist live in this village. This village is situated on the banks of Shyok river, after visiting where you get to see a beautiful view.

This is a village that India captured from Pakistan in 1971, which has now become a part of India. Top 10 Tourist Places In Leh-Ladakh

This village is surrounded by mountains from all sides as well as is situated on the banks of Shyok River, where after visiting, one feels a different world.

At present, this village has become a major attraction of Ladakh, to see which tourists from different parts of the country and abroad come here every year.

I sincerely hope that you have liked the information given by me about 10 major tourist places in Ladakh and I hope that you will definitely visit these places after visiting Ladakh. So if you like this information, then share it with your friends, relatives and neighbors, so that our enthusiasm increases and we can try to give more new information for you. 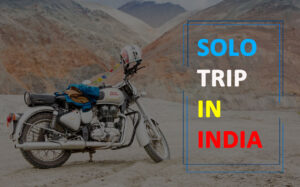 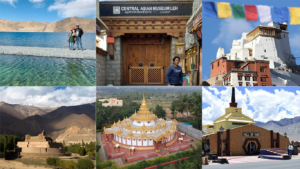