Vaishno Devi Temple is situated in a cave in the Trikuta hills of Jammu and Kashmir. Although the temple has been made very huge and grand. Vaishno Devi temple holds great importance for the people of the Hindu religion. Whenever a child is born in someone’s family. So many people visit the mother for the shaving of their children and for the long life of the children. And mother’s grace should always be on them. Asking for such respect.

By the way, Vaishno Devi temple holds a fair of devotees throughout the year. But a maximum number of devotees reach here during Navratri. Which happens in summer from April to June. At the time of Navratri, the splendor of this place is created. Because during this time a big Jagran is also organized in Katra.

The distance from Mata Vaishnodevi and Katra to Bhawan is 12–13 km. Which may take you 7 to 9 hours to cover on foot. If you go by horse or palanquin. So it takes you 5 to 6 hours. If you after Adhikari darshan you will reach Mata ke Bhavan in 4 hours. After this, according to the crowd, it takes 1 to 3 hours for the darshan.
After visiting the holy cave and temple of Mata Vaishno Devi, the devotees pay homage to the Bhairon temple. After this, the journey of the devotees is considered complete.

The mythology of Vaishno Devi temple is as follows. It is believed That when Bhairon Nath found Mata Vaishnavi in ​​the womb of Adhikari. So Vaishnavi left that place. Vaishnavi kept climbing the mountain to reach the holy cave but Bhaironath did not give up her pursuit and saw Vaishnavi inside the cave.

But he started challenging Vaishnavi. That’s why in the end the goddess revealed her divine form. And cut off Bhaironath’s head. There was so much power in the attack of mother’s sword. That Bhairon Nath’s head flew away and fell on another peak of the mountain situated at a distance of 1.5 km. Where is the Bhairon temple today? But his torso was lying at the entrance of the holy cave. After that Devi Maa immersed herself in deep meditation. Where today we see him in the form of a sacred Pindi. 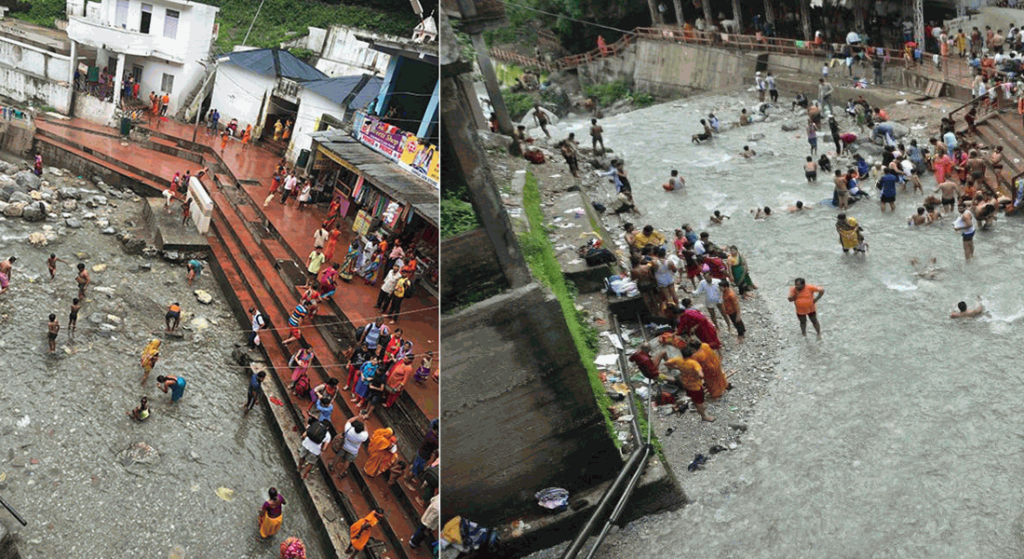 Pilgrims cross a small bridge after the police check post at Vaishno Devi. Ban Ganga flows from under that bridge. The legend of Mother’s miracle is associated with the Ban Ganga river. There is water in this river for 12 months of the year. According to Hindu tradition, devotees prefer to bathe in this river before proceeding on their journey.

But many travelers of today ignore this tradition. They go ahead without taking a bath. But the travelers who have an inclination towards religious traditions. Those travelers take a bath here and go on their further journey. That’s why some ghats have also been made here for bathing.

The name of this river is made up of two words. Baan means arrow and the word Ganga refers to the holy river Ganges. The old story is this. When Mata Vaishno Devi was going toward her holy cave, then he created this water spring with the arrow of his quiver. Mata Vaishnavi took a dip at this place and washed her hair. Since then people also call it Bal Ganga.

Charan Paduka has located just a short distance from Baan Ganga. Which is at an altitude of 3380 feet above sea level. At this place, the holy footprints of the mother are made on a flat rock. The pilgrims proceed further after seeing the holy feet of the Mother made on the rock. 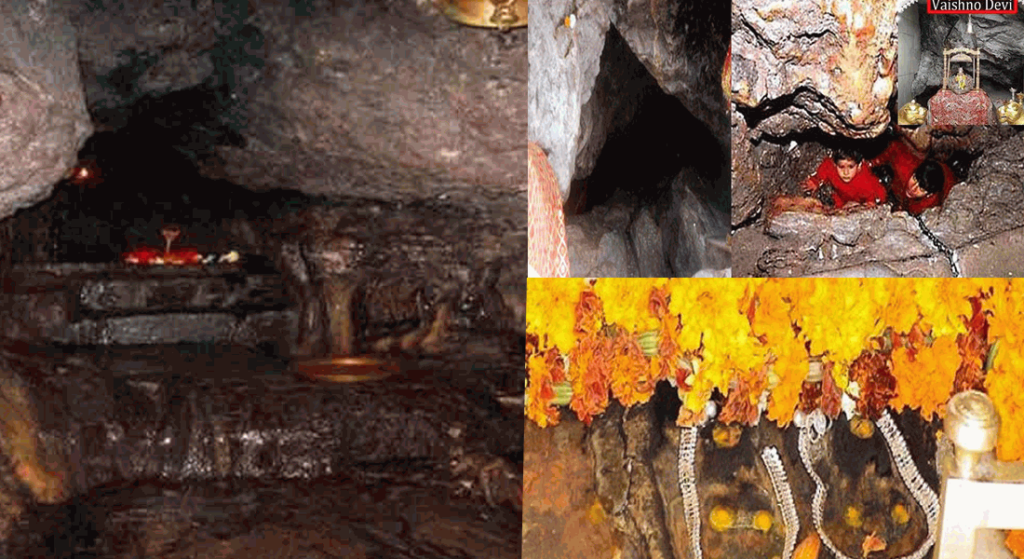 Adhkuwari is situated about 500 meters ahead of Indraprastha. Devotees can listen to the continuous announcements from the announcement booths before reaching there. However, on the way on foot, Adhkuwari is located halfway. The distance from Katra to Adhkuari is about 6 km. The distance from Adhkuari to the holy cave is also 6 km. Adhikari is an important place for devotees to visit during their visit to Vaishno Devi. After this, the darshan of the holy cave remains.

The word Adhkuari is derived from Adhikari. which means Anant Kumari. According to legend, in the form of a small girl, when Vaishnavi Pandit Sridhar organized the Bhandar. But Vaishnavi disappeared from the middle of the Bhandara. And the arrow stopped on Ganga and Charan Paduka. After which she reached Adhkuari.

Then he meditated for 9 months in a small cave the size of a womb. This cave is famous by the name of Garbhjoon. The name is derived from Garbh Yoni which means womb. That by passing inside this cave, all the sins of the devotee are washed away.

Because the cave is very tight. Therefore, it can only seat one person at a time. The cave is quite open and wide at the entrance. But when the devotee enters further. So the devotee comes out of the cave as soon as he crawls.

Himkoti is situated on the new travel route of Adhikari. Iceberg is also one of the beautiful places. Which offers breathtaking views of the entire valley. This place fills the natural beauty and thrill of travelers. Shri Mata Vaishno Devi Shrine Board has developed a viewpoint, restaurant, and dosa counter here.

There is a holy place inside the holy cave of the holy building. This is the last stop of the pilgrims’ journey. Inside the cave, the Goddess has shown herself manifested in the form of pindis. Mahalakshmi appears in the form of Mata Mahakali and Mata Mahasaraswati in this cave. 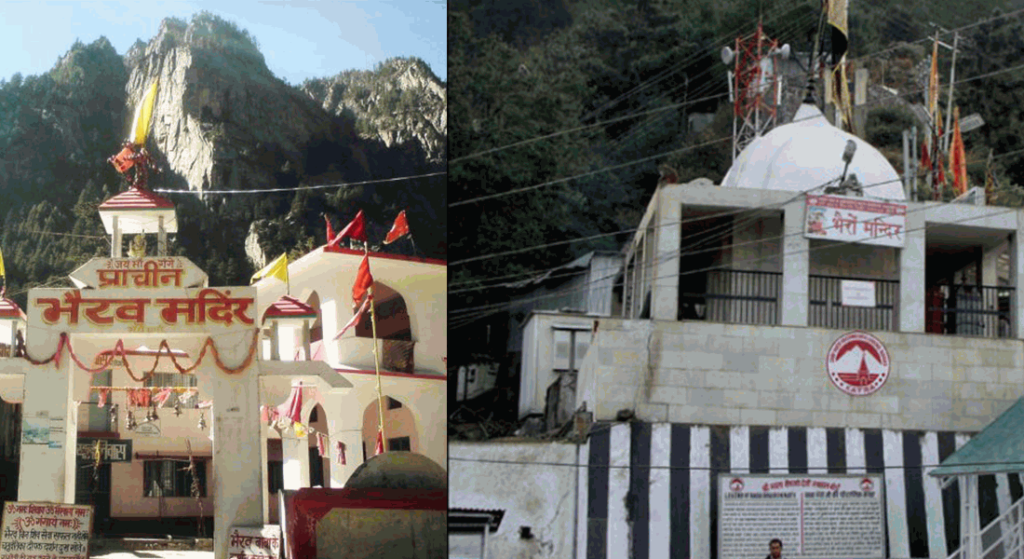 How to reach | Vaishno Devi Mandir

By Road: Jammu is very well connected by road to all major cities of India. You can reach Katra anytime by road.

By Train: There are many trains running between New Delhi and Katra station. Whose chair car (CC) minimum fare is Rs.1630. While the fare for an executive chair car is Rs 3015. All these trains run 7 days a week.

By Air: The nearest airport to Vaishno Devi is Rani Bagh. Which is located at a distance of about 50 km. From outside the airport, you will get a taxi to Katra, whose fare will be up to 500 rupees.