Moti Dungri Temple It holds a special place in the heart of every devotee. Because Churches across the country are dedicated to Ganesha. And in a city in change.

Moti Dungri Ganesh Temple is one of the most famous and revered temples of Jaipur. Every year thousands of devotees come to see it. Devotees visit this temple on every important occasion of their life. Be it buying your first car, after marriage, or otherwise. This temple holds different importance in the hearts of the people of the city.

According to old beliefs, the legend dates back to the 17th century when the king of Mewar was returning home. So he was carrying the idol of Lord Ganesha on a bullock cart. Then he made this announcement. Wherever the bullock cart will stop first, he will build a temple for Lord Ganesha.

The bullock wagon stopped near Moti Dungri’s foot. Then the construction of the temple was entrusted to Seth Jairam Paliwal and Mahant Shiv Narayan. Who built this temple in four years? This temple was completed in 1761.

A Scottish palace-like complex was built for the son of Maharaja Madho Singh. The temple was kept within the same. Because it is private property.

But the temple remains open to all devotees. Due to being built at the foot of the Moti Dungri hill, this temple was named Moti Dungri. Moti translation in English means pearl. Whereas in the local language, Dungri means a small hill.

The temple complex is spread over a distance of about 2 km. There are three in this building. Which represent the three main religions followed in the country. The intricate jaali work in marble in this temple reflects the beauty of this temple which has been carved out of stone. The walls are adorned with scenes from mythology that leave the visitors mesmerized.

Two steps have been made on either side of the entrance of the temple for the devotees to sit after worshiping in the temple. But it is believed that Lord Ganesha is pleased. If the devotees sit near the idol for a few minutes after praying. Don’t go back home immediately.

Inside the Moti Dungri Ganesh Temple 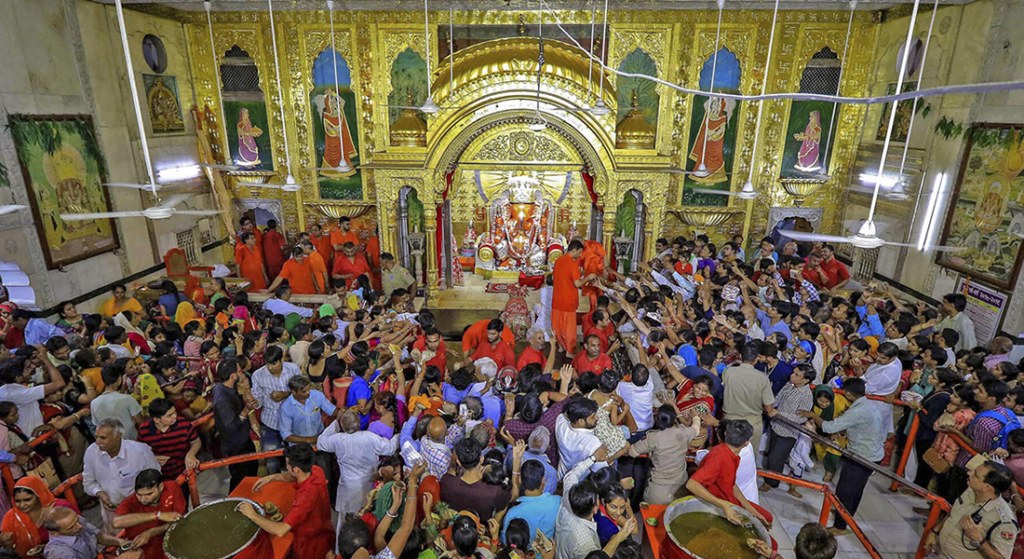 The interior of the temple is equally breathtaking. As much as its outside structure. A huge idol of Lord Ganesha is in a sitting posture. which points to the left with their trunk. Which enhances the beauty of the temple. Most of the idols of Lord Ganesha have their trunk on the right side. But its trunk on the left side is considered very auspicious.

The deep orange color of this idol has a wonderful glow. Murthy also has thick shiny black hair. The idol’s head is decorated with a silver crown. Which is covered with lavish clothes and jewelry.

A large mouse or mouse idol is placed near the feet of Lord Ganesha. Because the mouse is said to be the ride of Lord Ganesha. And the throne of the idol is made of silver and gold. There are two big silver pillars on either side. A large golden circle adorns the wall behind the idol. While a golden chhatra or chhatra is above the icon.

Best time to visit the temple

There is no best time to go to the temple, then whenever someone wants to pray. Then you can come to the temple. Moti Dungri Temple is open seven days a week and is crowded with devotees. But Wednesday temple day is one of the busiest days.

A small fair is held outside the temple one day every week. At the fair, hawkers are seen selling toys, sweets, and other items. Vehicles are not allowed to enter the temple gates on this day. Aarti, Bhajan, and Kirtan are sung during Darshan and devotees pay homage to Lord Ganesha.

A large number of devotees from the city and other neighboring towns also visit the temple on festivals like Ganesh Chaturthi, Annakoot, Janmashtami, and Paush Bada. And like other festivals, the road leading to the temple is beautifully decorated.

Entry to the temple is free.

There are three more temples right next to Moti Dungri Temple. Devotees also consider these as an important point of view when they come here after worshiping the Moti Dungri temple. There are many sweet shops located next to the temple which sells laddoos and other sweets. Which Bhagat takes as Prasad. Then dedicate it to Ganesh ji.

1. Birla Mandir: Birla Mandir is situated at a distance from Moti Dungri Temple. Which is the abode of Lord Vishnu and Goddess Lakshmi. Along with the devotees, tourists also come to this huge temple. And the architecture here is worth seeing.

This Hanuman temple is thronged by devotees, especially on Tuesdays. Because Tuesday is considered the main day of his worship. Both idols are present next to each other in the same temple.

Lord Shiva Temple: The Shiva temple is also revered among the devotees. Because a Shivling is installed in the temple along with many other idols. Monday is the day of Lord Shiva. Devotees start coming to the temple in the early morning on this day to offer milk, flowers, and other puja offerings to the Lord. 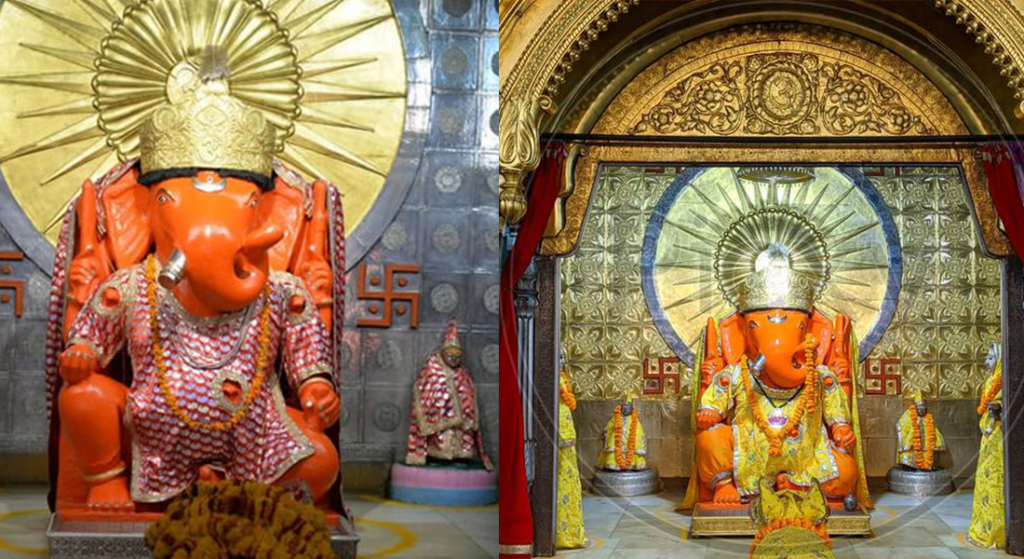 The temple is open for daily visitors. There are 7 Dharshans every day and several sets of prayers (bhajans) for each adorned incarnation of the god.

By Road: Moti Dungri is located in the heart of Jaipur city near Rajasthan University. Its nearest bus stand is University Bus Stand. Which is on Agra-Bikaner road.

By Rail: Moti Dungri is the nearest railway station to Jaipur. Which is well connected with railway stations of major cities like Delhi, Agra, Jodhpur, Mumbai, Bikaner, Udaipur, Ahmedabad, and Chennai.

By Air: The nearest airport to Moti Dungri is Jaipur. Also known as Sanganer Airport. Which is well connected by regular domestic flights to Delhi, Jodhpur, Udaipur, Kolkata, Mumbai, and Ahmedabad.