About For Suraj Tal Lake

Suraj Tal Lake, also known as Surya Tal. It is a divine lake surrounded by breathtaking valleys and magnificent mountains. Which is situated at an ancient place in the state of Himachal Pradesh. And is surrounded by snowy peaks almost throughout the year. This lake is also located in the Lahaul and Spiti valley. Which is just below Bara-lacha-la (4,890 m/16000 ft) and is known to originate from a tributary of river Chandrabhaga.

This magnificent lake has got the status of the 21st highest in the world and the third highest lake in India The nickname for it is the Lake of the Sun God. It is believed that That you can free yourself from all sins by taking a dip in this holy lake. The beauty of this lake is fully enhanced during winters as the mountains around it are covered with layers of snow, and it looks nothing less than a heavenly abode.

Suraj Tal Lake is considered a holy water body and attracts few devotees apart from ordinary tourists. Hence, especially in the summer months, this place gets buzzing with a large number of visitors.

In a place amidst natural splendor, beautiful lakes in hmachal Pradesh is a place that should not be missed by nature lovers. There is a lot to do and see for the tourists who come here.

The bulk of the lands surrounding it are uninhabited since the climate is comparable to that of the polar zone. This lake is a popular destination for motorbike and hiking enthusiasts in addition to being a stunning natural paradise for nature lovers and a wonderful treat for heavenly souls. This lake’s enormous popularity is mostly due to its proximity to the Manali-Leh road, which is a popular biking and hiking route.

Motorcycle riders and tourists exploring adventure frequently take a break at Suraj Tal and set up tent for a relaxing stay. Every photographer’s ideal location, the natural beauty at this revered and astoundingly beautiful lake seems like something out of a fairy tale.

Suraj Lake is a trekking enthusiast’s paradise since it offers some of the most breathtaking hikes and takes you on an amazing experience. It lies adjacent to the Baralacha Pass, where the highways heading to Zanskar and Spiti Ladakh meet. Numerous extraordinary hikes may be found around Baralacha Pass.

which boast countless natural settings that are bizarre and mysterious. Initially beginning at Zingzingbar, the Suraj Tal hiking route requires a 3 kilometre walk over the Bhaga River to a bridge on the north bank. About 2.5 km into the ascent, a severe incline starts, leading to Suraj Tal towards the finish.

The Manali-Leh Highway is a favorite base camp for trekkers, and on this trip, you will get to cross two of the most stunning passes, Baralacha La and Rohtang Pass. The trails within this trekking route will not only allow you to watch yourself being nurtured within the open arms of nature, but will also give you a to discover the Spiti region’s vibrant culture You may set up your tent in Suraj Tal under the starry sky to round off your thrilling trekking trip Manimahesh Lake.

How To Reach Suraj Tal

By Road: About 65 km separates Keylong from Suraj Tal. The Leh-Manali Highway, also known as National Road NH 21, provides quick access to Keylong district. The distance from the Bara-Lacha La pass to the Suraj Tal road is only 3 km. Winter renders this picturesque path, which runs from Rohtang Pass to the Leh area, completely impassable.

The best time to visit Suraj Tal is considered to be between April to May. But when the snow starts melting So the weather of this place becomes very pleasant. You can also visit this place between May and July. Rather, in other places the heat is at its fullest. Hence tourists come to enjoy the beauty in more numbers at this time.

During Winters:   One should avoid going to Suraj Tal during winters. Because the paths through which you can enter Suraj Tal. Those roads stop due to snowfall. And at the same time the temperature here falls by more than -2 degree Celsius. And the whole water body gets covered with snow.

During Monsoon:  You should also avoid going to Suraj Tal during monsoon. Because of constant torrential rains and dangerous landslides, the danger is enormous. And most of the roads that allow you to enter this place. 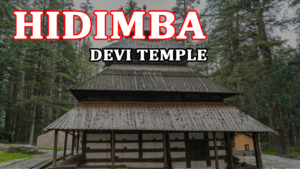 There is a temple of Hidimba Devi Temple located in Manali in Kullu, Himachal Pradesh. Its history is associated with the Pandavas. Maybe you are not aware of this. Today we are going to introduce you to the history of this temple. You know that after losing everything in gambling, Dhritarashtra and Duryodhana had sent […]